Public Policy Polling's survey of their home state, the first of the new year, delivered somewhat of a split verdict for Democrats and Republicans of North Carolina. On the bright side for Republicans, their newly elected Governor Pat McCrory is starting his term with largely positive feelings from most voters, sporting a 45% job approval rating, with just 19% disapproving. At the same stage of ex-Gov. Beverly Perdue's governorship in 2009, her job approval rating was at a much lower 43/32%. Not only is McCrory the most popular politician in the state, but President Obama, who currently averages a national job approval rating of 52/43%, is underwater at 46/52%. Tom Jensen of PPP notes in the release:

Democrat Kay Hagan remains largely unknown and hardly-liked after 4 years as Senator, with a job approval/disapproval rating of 34/36%.

The one bright-spot for Democrats in North Carolina is the fact that at this early stage of the 2014 cycle, there appears to be no credible Republican challenger to Sen. Hagan's seat in Washington. Despite her apparent middling poll numbers, all 7 potential Republican challengers tested by PPP failed to get closer than 6 points to the U.S. Senator who 31% of her constituents have no opinion of. Two possible GOP candidates tie for coming the closest to Sen. Hagan: Rep. Renee Ellmers (R), a 2-term Congresswoman from the 2nd district trails just 46-40%, and Rep. Patrick McHenry (R), a 5-term Congressman from the 10th district trails 45-39%. Hagan's weakest opponent, NC State Representative Thom Tillis trails by 10 points, 47-37%.

One thing worth noting, especially considering the typically older, whiter midterm electorates, is that PPP found NC voters identifying as 12 points MORE Democratic than Republican in their 2014 poll. Unfortunately, no exit polls were conducted during the last midterm election in NC (2010), and exit polling is unavailable for NC's 2002 midterm election. But it is worth pointing out that in the 2012 Governor's race between Pat McCrory (R) & Walter Dalton (D) just 2.5 months ago, Democrats only held a five point advantage over the Republicans in partisan identification. Even more telling than that, NC party I.D. was only D+11 in the 2008 Governor's race, the same year that a Democrat won NC on the presidential level for the first time since 1976. So while PPP's party ID finding may be a reflection of current dissatisfaction with Republicans in Washington, it also reflects a more Democratic electorate than North Carolina has seen in recent history, especially for a midterm election. Below are tables explaining what Barack Obama's, Pat McCrory's (R), and Kay Hagan's (D) job approval numbers would have looked like had PPP found NC party ID the same as the 2012 Governor's race (38% Democrat, 33% Republican, 28% Independent, or D+5), all other findings remaining the same:

Popular as he may be, Gov. McDonnell would struggle in future statewide races, per PPP

Virginia Governor Bob McDonnell (R) has been polled twice by two major polling companies at this early stage in 2013, and both find Virginians APPROVING of his job performance by large margins. Yet despite his strong standing with voters, he would struggle in a 2014 Senate race, or a 2016 presidential race, according to Public Policy Polling.

Quinnipiac University's survey indicated that Gov. McDonnell emerged from the 2012 Presidential race with his best net job approval rating since December of 2011, with 54% of Virginians expressing approval of the job he is doing, while just 27% express disapproval. Public Policy Polling was in the field one week earlier than Quinnipiac, and found McDonnell sporting an impressive 48/35% job approval/disapproval rating, though notably less impressive than Quinnipiac. In fact, as the chart below indicates, Governor McDonnell has maintained stellar approval ratings throughout his entire term in office (which doesn't expire until January 2014), averaging 55/30% across 51 polls over the last 3 years: 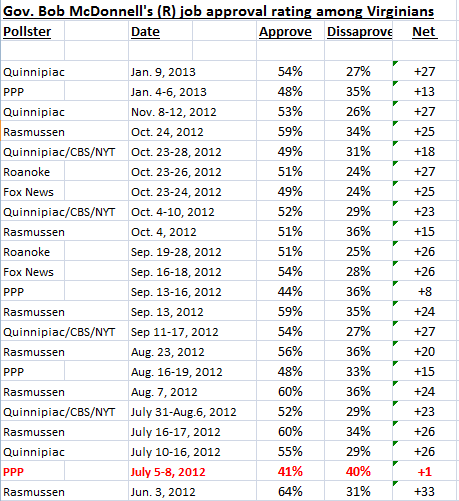 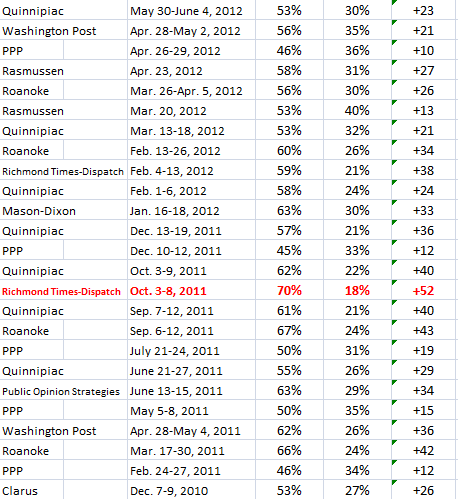 Hillary's favorability takes a hit, and Chris Christie's her most formidable 2016 opponent (PPP) 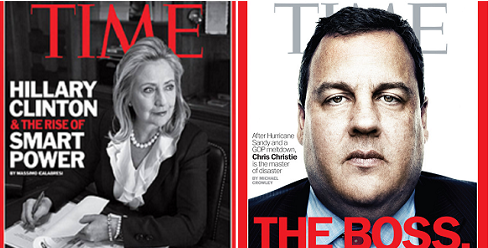 The Governor of New Jersey had reason to rejoice last week when Public Policy Polling released a poll summarizing all of the major possible 2016 presidential candidates favorability ratings. Not only is Christie the most liked national politician of the 18 PPP chose to test (he has a net 28 pt favorability rating, with 51% viewing him favorably, 23% unfavorably), but he is the only Republican that even comes close to giving Hillary Clinton a run for her money in a hypothetical 2016 match-up (trailing her just 44-42%). But the biggest story from the PPP release seems to have been lost by most of the media and punditry - Hillary Clinton has taken a pretty fair hit in her favorability rating.

In a survey taken January 3-6, 2013, Clinton clocks in with an impressive natonal favorable/unfavorable rating of 54/39% (+15 pts), but that's down from PPP's previous survey in December that measured her at 57/36% (+21 pts), and significantly down from the 65+% ratings she enjoyed throughout much of 2012. In fact, her January PPP rating is the lowest measured by any polling firm since last April. Below is a chart of Hillary Clinton's national favorability rating since 2011, according to Talking Points memo, The Argo Journal, and assorted polling: 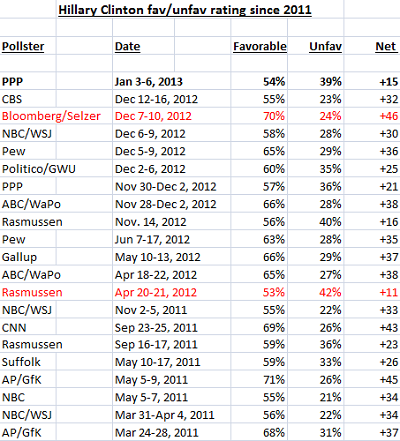 Over the course of the last two years, Clinton has averaged a very strong 61/30% favorable/unfavorable rating. Though that impressive average only serves to highlight how poor Hillary's current PPP rating is comparatively. In fact, the current PPP numbers are Hillary's 2nd worst since January 2011 (Rasmussen measured Hillary's favorability at 53/42% in April 2012, the only pollster to show Hillary weaker than PPP for the last two years).

Pic courtesy of the A.P.

Low and behold, Public Policy Polling is out with a brand new poll that shows Democrats poised to gain seats in their party's 2nd term, mid-season election. What's so special about that, you might ask. Probably the fact that the President's party has lost every 2nd-term, mid-term election since 1938, with just one exception: 1998.

But if PPP is right, Democrats would win the House of Representatives today by a 6 point margin, 47-41%. To be fair, yes, Republicans DO seem to be in a state of dissaray post-November 2012; they lost an election that was supposed to be painfully close by a not-so-painful 4 points, they were forced through fiscal cliff negotiations to accept tax hikes without spending cuts, and external events (Newtown massacre) put the GOP at odds with public opinion. But if the Democrats were to actually defeat the Republicans in November 2014 by 6 points, it would be historic. In fact, in the mid-term election of every 2-term president since 1950, the best the President's party did in the popular vote was was 51% in 1966, to the Republicans 48%. Yet despite that 3 pt popular vote victory for the Democrats, Republicans still gained 47 seats. The below chart documents the results of every 2nd term, midterm election since 1950. 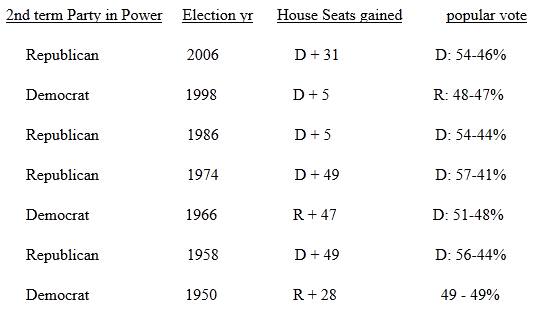 As you can see, if PPP's results hold up between now and Nov. 2014, it would be a historic popular vote victory for the Democrats. But a close look at PPP's internals reveals what COULD be driving the Democrats 6 pt lead on the House ballot. Poll respondents identified as 43% Democrat, 34% Republican, and 23% Independent, or D+9. That's 3 points MORE Democratic than we saw in the electorate just 2 months ago, when it was D+6. Not only that, but PPP's party I.D. is more Democratic than every midterm election since 1986. 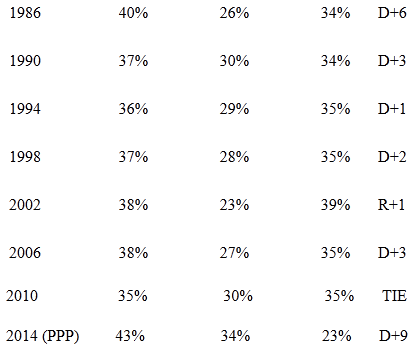 Public Policy Polling released their first poll on the 2013 Virginia Governor's race yesterday, and the results weren't great for likely Republican nominee, Ken Cuccinelli. The former Attorney General only  managed to garner 41% against his probable opponent, failed 2009 Democratic candidate and Clinton-confidant, Terry McAuliffe (who managed 46% in the PPP poll). This result closely mirrors a Quinnipiac poll from November that showed McAuliffe up 41-37%.

Diving into the poll internals, the news only seems to get worse for Cuccinelli. For an example, take a look at the ideological identification of the poll respondents. Virginia voters identify as 27% Liberal, 32% Moderate, and 41% Conservative. Compare this to the exit polls for the 2009 Virginia Governor's race, which saw just 17% Liberal turnout, 42% Moderate, and 40% Conservative. Despite Liberal turnout being much lower in 2009 than the 2013 PPP finding, Cuccinelli would still trail McAuliffe by the same margin if the PPP poll were reweighted to 2009 ideological turnout. See the math in the chart below:

How, exactly, is it that Cuccinelli (R) still trails McAuliffe (D) 46-41%, despite reweighting the numbers to a LESS liberal ideological make-up? Because regardless of the drop-off in liberals, moderates were a much larger percentage of the 2009 electorate than what PPP found in their poll. And unfortunately for Cuccinelli, the Republican trails the Democrat among moderates by a substantial, 61-25% margin. That was NOT the case in the 2009 gubernatorial race between Gov. McDonnell (R) and Creigh Deeds (D), when the Democrat carried moderates by a much narrower 53-47% margin. That difference in the performance of Cuccinelli and McDonnell among moderates is the main reason the Republican does just as poorly whether the numbers are weighted to the PPP ideological finding, or the 2009 ideological finding. IF, somehow, the Cooch were able to get 47% of the Moderate vote (as McDonnell did in '09), HE would lead the PPP poll, 51-42%, a 14 pt reversal from the actual PPP result.

Still, the PPP poll is rough for the Virginia Republican. Even IF Cuccinelli were lucky enough to see low liberal turnout like 2009, he'd trail in the PPP poll 46-41%. But it's worth noting that while the PPP ideological I.D. finding is more liberal than the 2009 VA electorate, the 2012 electorate was much LESS conservative. Conservatives made up 41% of the respondents in the PPP poll, 40% of actual 2009 voters, but just 31% of actual 2012 voters. If PPP is right, and 2013 turnout sees low conservative turnout like 2012, Terry McAuliffe (D) has the potential to win big: