It was the 'oops' heard 'round the world. A painstakingly demeaning moment in front of millions of TV viewers nationwide turned Texas Governor Rick Perry's 2012 Presidential campaign upside down. Perry, who entered the field later than any contender, needed to make a good impression on voters just tuning into the race. Instead, he reenforced preconceived notions. Like the fact that he was an intellectual lightweight, an accusation hurled often at ex-President George W. Bush. And who could blame anyone for buying into those stereotypes? It's not as if Perry was trapped in a 'gotcha moment' by the debate moderator. He was hoisted by his own petard (thanks Selina!), unable to complete his own talking point on the three federal agencies he would abolish as President.

Needless to say, the "oops" moment was a low point for the Perry campaign. He quickly fell into single digits in national polling and never recovered, having made a huge splash upon his late entry into the race on August 13, 2011. Before the "oops" debate on November 9, 2011, Perry averaged 19% in national Republican primary polls. After that debate, until he suspended his campaign on Jan 19, 2012, he only averaged 7%. See the table below:


Thoroughly mocked and humiliated on a national level, Perry returned home to finish out the three remaining years of his fourth term as governor. And not even they were happy to see him.

If "oops" was Perry's low moment, then his best moment since then would certainly have to be now. After the failure that was 2012, Perry set out to rekindle relationships and reassure potential supporters that 2016 would be much more serious. And external political events, namely the crisis of unaccompanied immigrant children flooding the southern border, have further boosted his profile. All of this has culminated in the two most recent national 2016 GOP primary surveys finding Perry essentially tied for first place.

A recent Fox News poll finds that while several potential candidates are clustered together at the top, Rick Perry and Jeb Bush emerge with 12% a piece, more than anyone else. A CNN poll released just a couple of days earlier found Perry again in double digits amidst a crowded field, with 11%. Chris Christie and Rand Paul led with 13% and 12%, putting Perry well within the +/- 4.5% margin of error.

Yet perhaps more important than Perry's raw percentage of the likely 2016 Republican primary vote are the trend lines. In the case of the Fox News poll, Perry drastically improved his performance from their prior survey in April, where he only managed 5% of the vote (good enough for 6th place). In the CNN survey, Perry nearly doubled his level of support from their prior poll just two months ago, jumping from 7th to 3rd place.


Bitter primary battles come and go. But one thing nearly all of these events have in common is that at the end of the day, the overwhelming majority of the losing candidate's supporters wind up backing their nominee, regardless of who they voted for in the primary.

Don't get me wrong - there have been multiple polling examples of intra-party anger like we're seeing in Public Policy Polling's newest survey on the Mississippi Senate race. In each of those circumstances, however, the party largely came home to support their candidate in the general election.

Granted, the level of discontent found among Republicans in the newest Mississippi poll seems a bit unprecedented, at least when comparing their results to other post-close-primary polls from 2012, 2010, and the 2008 Presidential primaries. Cochran (R) leads Childers (D) overall by a 16 point margin, or 40-24%. The Democratic candidate actually finishes 3rd to undecided, which receives 31%.

Of the 31% of Mississippi voters that say they are undecided in the November Senate battle, the majority are Republicans and Independents, two groups that favor Cochran overwhelmingly in the survey. In fact, Republicans ALONE account for 51% of the total "undecided" vote. All of this has served to keep Thad Cochran a good distance from the magic number of 50% both in the general election, and with HIS OWN BASE. Yes, that's right. Cochran's only winning 48% of Republican poll respondents (his overall lead over Childers is thanks in large part to historic support from Democratic and black voters).

Now sure, there was lots of hoopla about Hillary Clinton Democrats voting for John McCain back during the 2008 presidential campaign. And yes, Obama's poll numbers among members of his own party suffered as the primary heated up and after it ended. Consider the table below, which points out Obama's support among Democrats in polls against John McCain taken just before and after the primary ended. 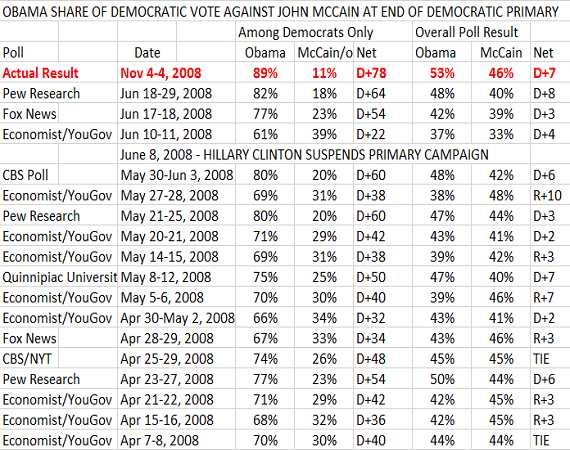 As you can see, Obama hit a low of 61% support from Democrats in a hypothetical match-up against John McCain, at least according to a YouGov/Economist poll taken shortly after Hillary Clinton's June 7th, 2008 campaign suspension, only to regain their support by November. But that's sill nothing compared to the mere plurality of support Thad Cochran enjoys from his own party in the PPP survey. Among the dozens of surveys taken in 2012 and 2010 Senate and gubernatorial primary races, not once could I locate a nominee whose support among their own party was as low as Thad Cochran's is per PPP.

For example, Senator Blanche Lincoln's (D-AR) support within her own party was just 68% against John Boozman (R), immediately following her contentious primary with Lt. Governor Bill Halter. She still managed to wrangle up 78% of Democrats to support her ultimately losing bid in the end, however.

Controversial Senate nominee in Delaware, Christine O'Donnell, regularly polled in the 60% range with Republicans against Democrat Chris Coons before and after her ultimately successful primary against Mike Castle. On election day, Republicans came home, to the tune of 81%.


Of the premier 2014 midterm contests, the Louisiana Senate race is *the* most likely to flip into Republican hands, at least according to current Huffington Post Pollster averages. That's why the  new Public Policy Polling survey allowed the Landrieu campaign to breathe at least a slight sigh of relief, especially considering the recent spate of run-off polling. An incumbent who is tied with their opponent at 47% wouldn't typically be received as welcome news for most political campaigns, unless six of the eight polls taken this year found that opponent ahead.

But as far as Democrats are concerned, the good news stops there. Because a closer inspection of the PPP memo and crosstabs suggests little room for improvement for the incumbent:

The likely Landrieu/Cassidy match up for the December runoff is tied at 47. Among those who support Maness or Hollis or are undecided for the November election, 68% move to Cassidy for December compared to only 11% who move toward Landrieu. Even though only 6% of voters are undecided in that match up, they don't set up great for Landrieu- 61% voted for Romney to 20% who voted for Obama, and she has a 14/65 approval rating.


It's July, and if you buy the PPP numbers, a mere 6% of likely voters are undecided. So no matter where they end up, the Louisiana Senate race is bound to be at least remotely close.

Suddenly, the GOP challenger jumps out to a 51-48% lead, which goes to show that despite undecided voters being few and far between, Landrieu is unpopular enough with them to make a difference. The same thing happens when you reallocate undecideds according to how they voted in the 2012 election (61% for Romney, 20% for Obama). What was a 47-47 tie again becomes a 51-48% Cassidy lead.