Quinnipiac released a 2013 Virginia Governor's poll on November 14th, showing tight races between the presumed Democratic nominee Terry McAuliffe and his two likely Republican opponents, Bill Bolling and Ken Cuccinelli. Though with Bolling indicating yesterday he would not seek the Republican nomination for Governor (and Mark Warner indicating the same), the race seems all but set between McAuliffe and Cuccinelli. McAuliffe was an unsuccessful candidate in the 2009 Democratic primary for Governor, and lost to Creigh Deeds (D) (50-26%), the man who eventually went on to lose to Gov. McDonnell (R) in the general election, 59-41%. Ken Cuccinelli is the state attorney general who earned the reputation among Democrats as a Republican boogey man by filing suit on behalf of his state against Obamacare. This tweet from NBC's Chuck Todd sums up insiders view of a potential McAuliffe / Cuccinelli match-up:

Yesterday I proposed that Cory Booker may not want to give up yet on the NJ Governorship in 2013, considering Christie's inflated numbers with Democrats and Independents in the wake of Hurricane Sandy in a new Rutgers-Eagleton poll.

But like last night's post, the results look a bit different in the event Booker is able to do at least as well among Democrats as John Corzine (D) in 2009. The Rutgers poll showing Christie up 53-34% became a 2 point Booker lead (46-44%) if the poll is reweighted to show Booker receiving 86% of the Democratic vote (the percentage obtained by Corzine in '09). Does the same thing happen to the Quinnipiac poll when reweighted to Corzines '09 numbers?:

As survey after survey pours out of New Jersey confirming Chris Christie (R) as one of the most popular Governors in America, the likelihood of popular Democratic mayor Cory Booker entering the 2013 gubernatorial race has dropped.

Once thought to be somewhat vulnerable to a challenge from a strong Democrat, Chris Christie now leads all of his challengers by at least 19 points, including the much hyped, rising Democratic star,  Cory Booker. A new Rutgers-Eagleton poll of New Jersey, taken Nov 14-17, shows the boisterous New Jersey Governor receiving a 19 point bounce in his personal favorability rating following a mega-storm that left millions throughout the northeast stranded and without power. Just one month earlier, before Sandy struck, and 1 month after his keynote speech at the RNC, Christie was barely above water with New Jersey voters. His favorability rating was an unimpressive 48/42%, and more voters said they'd rather NOT reelect him (47-44%). Seven weeks later, and Christie's favorability rating has surged to 67/25%, representing a net 36 point net increase. Now, Voters DO want to see him reelected, 59-32%, and a recent Fairleigh Dickinson poll shows his job approval rating at  77%.

In 2008, election watchers were surprised when voters under age 30 turned out in record breaking numbers to support Barack Obama's first presidential bid (by record breaking margins, as well). But they were down right aghast when Team Obama, despite an abundance of polling data indicating youth enthusiasm was down, managed to increase turnout amongst this historically unreliable voting block. But is this voting block on a consistent rise in the same way white voters have been on a consistent decline? Are 18-29-year-olds a permanent constituency of the Democrats, or does history suggest there's a path for GOP inroads? 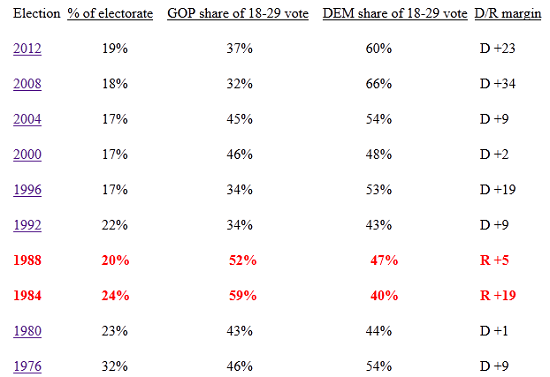 With the 2016 New Hampshire Democratic primary about 40 months away, Public Policy Polling is out with a survey revealing some interesting (or not so interesting, depending on who is running) top line results. In the event Sec. of State Hillary Clinton chooses to run, she seems poised to win her second NH primary in a row, but by a much larger margin than her 39-37% victory over Barack Obama in 2008. She leads a crowded 2016 field by a WHOPPING 60%, with 2nd place Joe Biden at 10% - amazing considering he is now a two-term Vice President.

"Given the choices of Joe Biden, Hillary Clinton, Andrew Cuomo, Martin O’Malley, Deval Patrick, Brian Schweitzer, Mark Warner, and Elizabeth Warren, who would you most like to see as the Democratic candidate for President in 2016?

While national partisan identification may have shifted 1 point from the 2008 election to the 2012 election, that spread wasn't consistent everywhere. Some states saw larger shifts than others, usually in favor of the Republicans, but certainly not always. Nationally, 38% of voters identified as Democrats (down 1 pt from 2008), 32% identified as Republicans (same as 2008), and 29% identified as Independent (also, same as 2008).

Below is a chart showing the shift in national party ID per state since 2008. Note that some states are missing due to the "National Election Pool's" decision to cut back on exit polling in 2012 as a cost saving measure. As a result, on 31 states featured exit poll results, as opposed to all 50 states in 2008.

A new article from the Christian Post reports that an anonymous evangelical leader close to the Santorum team has confided that the 2012 GOP runner-up is taking steps to run in 2016:

"Rick's getting ready [sic] organized and is not going to be behind the eight-ball when it comes to fundraising and building a grassroots organization," the anonymous source said. "I think you'll see and hear a lot from Rick in the next 12 months."

The Republican field in 2016 looks wide-open for the moment, according to Public Policy Polling (D). In newly released polls of Iowa, New Hampshire, and Florida,  politicos ranging from Mike Huckabee, to Chris Christie, to Jeb Bush come out at the top of the pack. With the Iowa Caucuses just three years away, lets take a look at some different turnout scenarios based on past exit polling. The information below provides a more detailed look at the Iowa PPP results, extrapolated from their ideological I.D. findings.

How Exit Polls changed as election night wore on 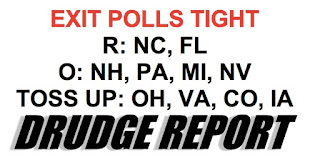 One interesting feature of the 2012 general election is the fact that historically unreliable EARLY exit poll data actually proved to be more favorable to Romney than Obama, going against the popular notion that early numbers tend to favor Democrats. Several metrics, ranging from Party ID, to views of government, to race/ethnicity showed  more promising numbers for Romney earlier in the night, only to magically change as more and more returns were actually counted.


But by the time the night was over, that 12 point lead for those thinking the government is doing TOO much had dwindled to just an 8 point, 51-43% lead.

"In two ABC prelim exit polls, Romney slightly edges Obama on handling of the economy and the deficit (51-47 and 50-46 percent)"


"In our ABC preliminary exit poll, voters give Obama the edge over Romney on who is more in touch with them (52-44)"

What were the actual numbers? In the end, Romney's edge over Obama on the economy and deficit was NOT the 4 points early exit data indicated. In fact, it wound up being just 1 point, 49-48%, and just 2 points on the budget deficit (49-47%). Meanwhile, the number who felt the President was more in touch with them than Romney grew from an 8 point deficit to a ten point deficit (53-43% for Obama).

The difference between early, preliminary exit poll data, and the final result was evident in several other places, but perhaps none more consequential than partisan identification. At about 6:05pm, E.S.T., one hour before the first polls closed on the East Coast, CNN provided viewers with (and I tweeted) the preliminary Party ID data:

2016 Not Looking Any Better for Republicans

Days before the polls closed on November 6, 2012, the Obama team was predicting publicly that the electorate would be less white than in 2008, and they were right. Their argument went like this:

"Since the campaign began, Team Obama has assumed that whites would make up 72% of voters, down from 74% in 2008. (The logic: This percentage has decreased in every U.S. election, and the minority population continues to grow.) On the other hand, Republicans counter that due to greater GOP enthusiasm, the white percentage could very well stay the same as in 2008 -- or even be a tick higher. And according to our NBC/WSJ pollsters, the final outcome here could sway the election. If you assume that both sides maximize their margins (Romney wins whites by 20 percentage points and Obama wins minority voters by 60 percentage points), whites making up 75% of the electorate would give Romney the edge with the popular vote by a fraction of a point. But if the white percentage is 74%, Obama would win the popular vote by a fraction of a point. And if it’s 73%, Obama wins by one point. Bottom line: Watch the white percentage in tomorrow night’s exit polls; it will tell you more about where Virginia or Iowa or Colorado or Wisconsin will go."

Mitt Romney won a larger percentage of the white vote than George W. Bush in 2004, but that wasn't enough to overcome massive deficits with non-white voters. Perhaps the best example of this lies with the Latino vote. Romney lost the third largest voting block by an astonishing 44 points (71-27%). Compare this to 2004, when Bush ran just 9 points behind John Kerry among a group that made up  8% of the electorate (44-53%). Or compare it to the 2008 Democratic landslide in which McCain lost the Latino vote by 36 points, or 67-31%.

A look at 2012 Demographics

Myself and others speculated that if the GOP won white voters by about 20 points or more, that would offset any gains for Democrats from white turnout being held at 2008 levels (when they made up 74% of the electorate). And indeed, Romney performed much better among white voters than John McCain four years earlier, winning the largest voting block 59-39%. McCain only carried the group by 12%.

But what many did not count on (myself included) was a full 2% drop in the number of white voters in the electorate. That, coupled with 2008-like African American turnout, increased Latino turnout, and a stronger Obama margin with Latinos led to Romney's demise.