It's Public Policy Polling vs. Quinnipiac University in Ohio...Again

This isn't the first time the two reputable pollsters have presented wildly disparate findings. Though it's becoming standard with their results in the state of Ohio. Back in August, I noted on this blog how recently released PPP and Quinnipiac University polls in Ohio diverged significantly. It was as though the polling firms had polled entirely different universes.

In one (found by Quinnipiac), the Governor of Ohio was pretty darn popular, sporting a 54% job approval rating, versus just a 32% disapproval rating. Voters said, by a 49-37% margin, that Kasich deserved reelection. And he led his most likely Democratic opponent, Ed Fitzgerald, by fourteen points. President Obama was in terrible shape in the state as well, with a 40/57% approval rating.

In the other (found by PPP), the Governor was struggling, managing just a 42/47% approval rating, and trailing his virtually unknown Democratic opponent by three points. President Obama was underwater (47/49%), but not nearly to the extent found by Quinnipiac.

Then last month, Quinnipiac and PPP smacked us with a dose of deja vu - the two pollsters were butting heads again, with PPP finding a notably more anti-Kasich electorate than the Q-poll, especially with regards to the Governor's job approval rating. Consider the chart below of Gov. John Kasich's job approval rating, as well as his performance against Ed Fitzgerald, in Quinnipiac and PPP polling over the last year:

Noting the two most recent polls in the above table, you can see how once again, PPP and Quinnipiac paint very different pictures for the state of Ohio voter's opinion on their Governor and the 2014 race. According to the former, Kasich is unpopular (37/42% job approval), and running neck and neck with his most likely Democratic challenger. According to the latter, Kasich is quite popular (52/33% job approval), and enjoys a modest but discernible lead in a hypothetical 2014 match-up.

What is the big discrepancy stemming from? It isn't that the two polling firms disagree on the likely makeup of the 2014 midterm electorate. Their demographic findings are practically identical. No, the variance simply stems from disparate findings with regards to the various demographic and political groups being tested. See the table below 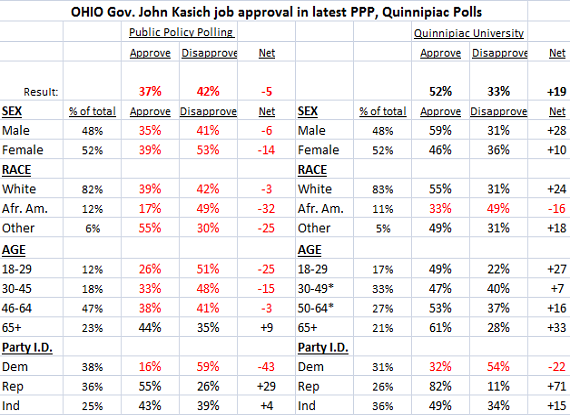 As you can see, the gulf between the two pollster's numbers is so steep, it can't be explained by the larger-than-normal margin of error associated with specific demographic findings. The difference between Gov. Kasich's overall job approval in the November PPP poll and November Quinnipiac survey is a net 24 points. Among men only, it's a net 34 points. With women, 24 points. With 18-29 year olds, there is a staggering 52 point difference between PPP and Quinnipiac's job approval findings for Gov. Kasich. The discrepancies show up in the head-to-head polling against Democrat Ed Fitzgerald as well, though to a lesser extent than the Governor's job approval rating: 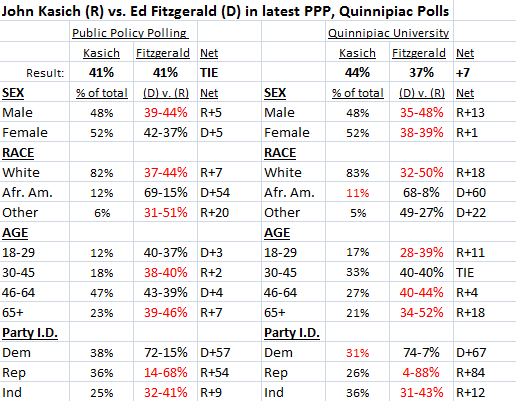 So what difference does any of this make, anyway? Well, it makes a huge difference to the Kasich and Fitzgerald campaigns, for obvious reasons. But beyond that, it makes a difference to Quinnipiac University's Polling Institute, and Public Policy Polling. There's just no way to test their accuracy at this point, at least not until more pollsters weigh in on the state of things in Ohio. Both polling firms performed relatively well in the 2012 election, and have strong track records. Quinnipiac is nonpartisan. PPP is not, and has come under a fair amount of fire recently from poll-watchers for suspect methodological practices. Regardless, both sides have some numbers to point to to prop up their standing. "Take your pick," so to speak.

And if that's what you intend to do, former TNR polling writer, and new New York Times employee, Nate Cohn offers his advice on which to pick.
Posted by brandon at 3:36 PM No comments: