Congressional Republicans really, really need North Carolina's Senate seat to fall in their column next November if their dream of capturing BOTH houses of Congress for the 1st time during the Obama Presidency are going to be realized.

Fortunately for them, Barack Obama, after a brief reelection honeymoon, is again unpopular (thanks to a persistently weak economic recovery, and more recently, a foreign policy blunder that would make even Jimmy Carter blush).

This fact, coupled with the structural advantages the party out of power typically enjoys in midterm elections, has the GOP seeing visions of 2010 on the horizon.

But 'not so fast' says one of 2012's most accurate pollsters, the notably partisan and recently embattled Public Policy Polling . . . or at least, not if the Republicans path to 51 Senate seats runs through North Carolina.

The current breakdown of the 113th Congress is 54 Democrats and 46 Republicans, meaning the GOP would need to pick up at least 5 seats to obtain a majority. According to an array of political forecasting reports, the Republican's are all but assured a three-seat pick-up (the retiring Democrats in South Dakota, West Virginia, and Montana). The remaining pick-ups are expected to come from 2 of the following red-state Democrats up for reelection in 2014: Sen. Mark Pryor of Arkansas, Sen. Mary Landrieu of Louisiana, Sen. Mark Begich of Alaska, or Sen. Kay Hagan of North Carolina.

And according to last week's numbers from PPP, Sen. Hagan (NC) looks like the LEAST vulnerable. She leads all 7 of her most likely Republican contenders by double-digit margins ranging from 12-17 points.

As the excuse for poor poll numbers, the GOP camps will rightfully note their candidate's near-anonymity with voters. But Senator Hagan isn't that terribly well-known herself, especially for a five year Senator.

What's more? The potential GOP nominees are polling the weakest they have to date in head-to-heads against Hagan, and PPP's been following this race every month since December 2012. 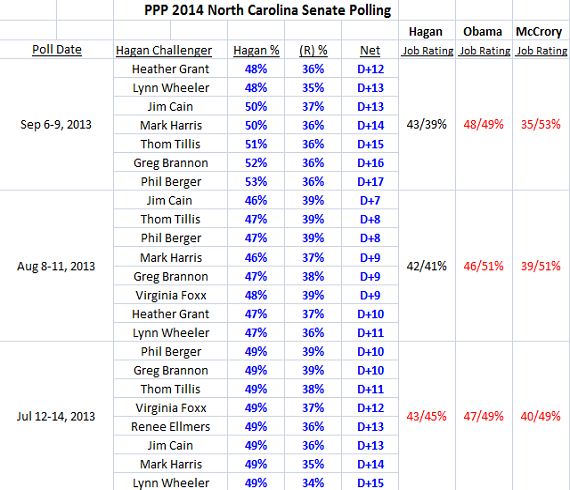 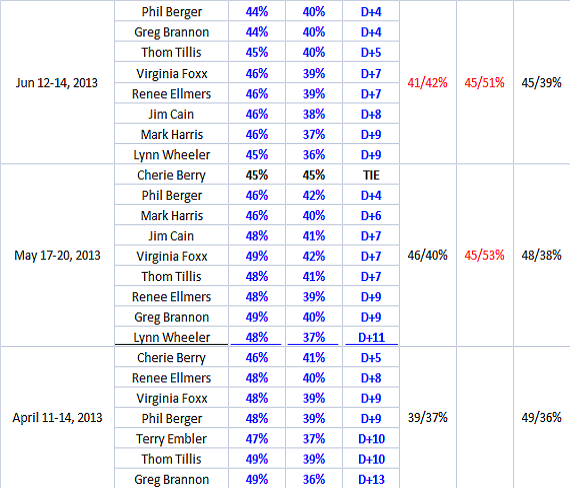 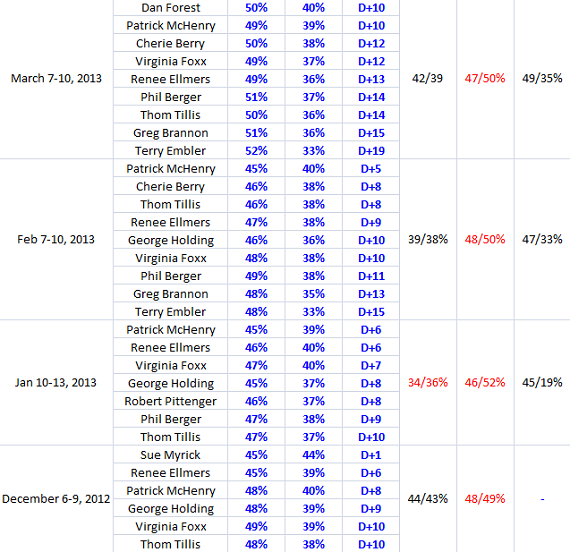 Prime-Time Addresses Have Moved Public Opinion Before, But Obama's Starting From FAR Behind On Syria


In less than 12 hours, President Obama will deliver a national address in prime-time in an attempt to rally the country, and congress, behind a possible military strike against a chemical-weapons yielding Middle Eastern dictator.

But it's far from the first time a commander-in-chief has pep-talked the nation in advance of (or as often the case, just after) the commencement of major military endeavors. In fact, Presidents have spoken to the nation in televised addresses designed to coincide with imminent overseas hostilities no less than nine times across the last five Presidents over the last 30 years.

Unfortunately for Barack Obama, his "rally-to-the-flag," pre-war address will have two dubious distinctions.

First, unlike President Reagan's military outings in Grenada and Libya, or George Bush Sr.'s Panama and Iraq Invasion, or Clinton's Somalia, Sudan and Kosovo bombings, or George W. Bush's wars in Afghanistan & Iraq, or Libya in 2011, President Obama is tasked with selling a phenomenally unpopular mission in Syria.

Furthermore, though each of the last four Presidents have seen worse job approval ratings than Obama is currently seeing at some point in their respective presidencies, none of them were so unpopular as he is now on the eve of a potential military strike against another country.

Consider the table below, which documents Barack Obama's job approval rating since the August 21, 2013 Syrian WMD attack that got this mess started, as well as support vs. opposition for military action in Syria since the same date:


Over the last 2-3 weeks, Barack Obama has averaged a 45/50% job approval rating, while support for the proposed military operation in Syria has been anemic, at 32/52%.

Labor day has come and past, which means the majority of Virginia voters are just tuning into a race that until now had been largely ignored by everyone but reporters and political junkies. And there's little doubt that the Cuccinellli camp would rather them stay tuned out a bit longer, at least according to three new polls.

On top of the likely harmful side-effects of Republican Governor Bob McDonnell's growing scandal, Democrat Terry McAuliffe has apparently done a good job of painting Attorney General Cuccinelli (R) as an archaic social conservative who is too ideologically driven and extreme for Virginia's increasingly blue electorate. He's done so by calling attention to Cuccinelli's push for a ban on oral sex and sodomy, as well as his staunch opposition to abortion.

Cuccinelli, for his part, has unleashed a barrage of attacks on McAuliffe's perceived weak point - his propensity for honesty and truthfulness. Whether it be his involvement in Greentech, a company he co-founded that is now under federal investigation, or the failure of a second energy company with McAuliffe backing to bring jobs to Virginia, Cuccinelli has relentlessly gone after his Democratic opponent in a style familiar to Obama's attacks on Mitt Romney's experience at Bain Capital in the 2012 Presidential election.

But the verdict is in on the first half of the long 2013 Gubernatorial slug-fest in Virginia, and the polls have called the first part of the battle for Terry McAuliffe. Not only that, but the three most recent Virginia surveys suggest the race is tilting decidedly in McAuliffe's favor:

The above numbers represent Cuccinelli's worst showing of the race in any PPP or Quinnipiac survey since the start of the year. And though this is Emerson College's first outing in Virginia, they paint the bleakest picture of all for the Republican.

So where exactly is Cuccinelli weak? Pretty much everywhere, according to the cross tabs. The table below notes the performance of McAuliffe and Cuccinelli among gender, racial/ethnic groups, and political party: 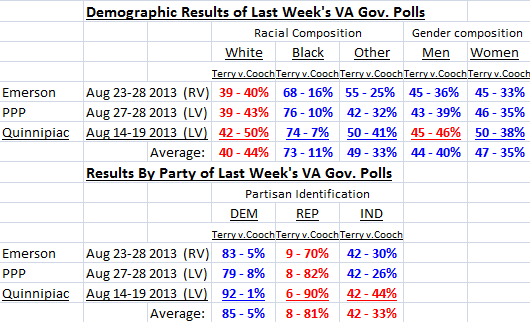