Since the birth of the Tea Party Movement in the aftermath of the election of Barack Obama in 2009, the American public has been subjected to claims by the media that the Republican party of today is more Conservative than the GOP of the 1980s and 90's, or even that of George W. Bush. But is that actually the case? Yes, at least based on the way Republican primary voters have viewed their own ideologies since 1996.

Sure, there have been studies indicating CONGRESSIONAL Republicans have become more Conservative, but have the rank and file followed their lead? A close examination of GOP primary exit polling from 1996-2012 indicates they have. In the 20 states where exit polling was conducted in 2012, Republican primary voters were split exactly into thirds between identifying as "very conservative," "somewhat conservative," or "moderate/liberal." To be exact, 34% of Republican primary voters identified their own political ideologies as "very conservative." That number ranged from a nationwide high of 49% in the Louisiana and Nevada primary contests, to a low of just 15% in Massachusetts (no surprise there). Meanwhile, 33% of Republican primary voters nationwide identified as "somewhat conservative", while the remaining 33% identified as "moderate or liberal." The "moderate/liberal" voters' largest share of the Republican electorate came in the Vermont primary (where they made up 53% of voters), Massachusetts primary (where they made up 49%), and New Hampshire primary (where they made up 47%). Conversely, moderate/liberals saw their smallest shares of the GOP electorate in Iowa (17%), Nevada (17%), and Louisiana (23%).

To see the math on how I compiled the above figures from exit polling, see this dataset

From the standpoint of political popularity, it doesn't get much better than it currently is for New Jersey Governor Chris Christie (R). He assumed office in 2009 with a respectable 3.5 point victory over the incumbent Democrat, and remained reasonably well-liked, reforming state pensions and taking on the teachers union, in a state known for its preference for Democratic politicians.
But that all changed in the days following October 30, 2012. Hurricane Sandy made landfall in New Jersey, and Chris Christie made a very impassioned, and very public plea for aid for New Jersey residents. Furthermore, as President Obama toured the storm-ravaged area, just days before his reelection, Republican Christie heaped praise on him, to an excessive degree in the minds of many Romney supporters. The total effect of Christie's leadership and bipartisan cooperation in the wake of a devastating storm had a huge lifting affect on attitudes towards Christie personally, as well as the job he was doing in New Jersey. Even nationally, Christie saw a boost in his ratings.

That's why the much touted Newark Mayor, Cory Booker (D) decided against a 2013 gubernatorial run last month. At a point before Hurricane Sandy, Christie was viewed as vulnerable in 2013, and not just because he was your standard Republican running for reelection in a Democratic state, but also because Booker was particularly popular among the Democratic base. In fact, PPP found Booker beating Christie in a hypothetical race in July, 47-43%. Quinnipiac found him trailing just 46-42% in October, while also finding the little-known State Senator Barbara Buono losing by a to-be-expected 49-33% margin. But unfortunately for both of them, that's not the Chris Christie they will get to face in November 2013. No, the new, wildly popular, post-Sandy Christie led Booker in polling by anywhere from 14 to 18 points. As for the woman who is most likely to actually have to face Christie?...


She trails by a staggering 37 points. In a post on this blog in December, I argued that Cory Booker, as the Democrats strongest candidate, should still consider running for Governor, under the belief that Christie's post-Sandy job approval would inevitably fade. But as of today, his numbers have shown no recent signs of fading: Consider the below chart on Christie's job approval rating since he took office in 2010: 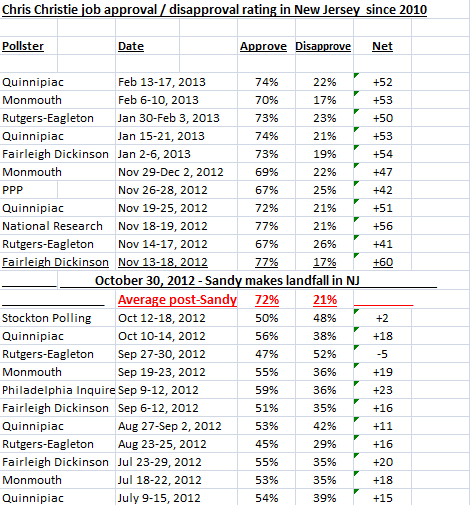 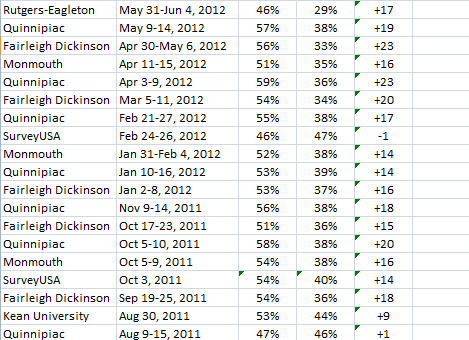 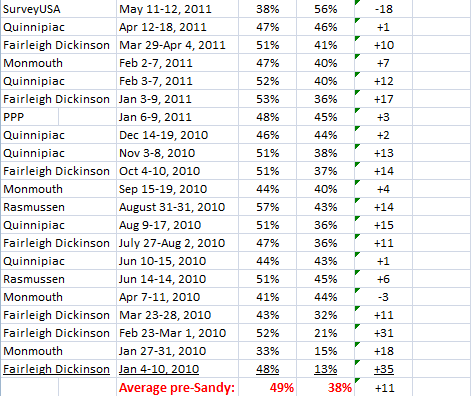 Compiled from TPM, The Argo Journal, and other random finds 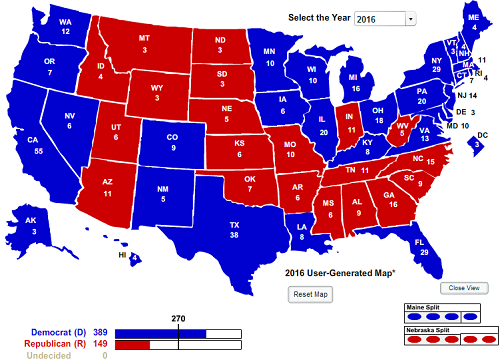 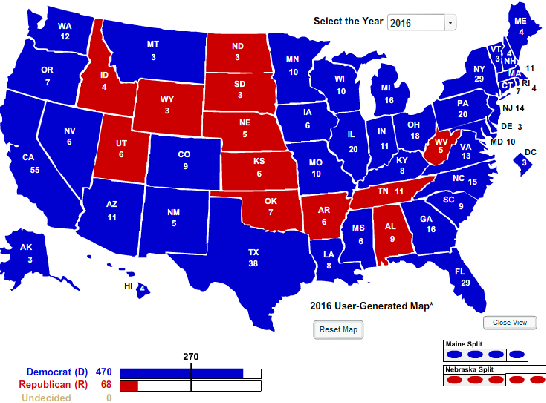