In my estimation, if every state awarded Electoral votes by Congressional district (a la ME & NE), Romney would have won, 276-262.
— Dave Wasserman (@Redistrict) December 13, 2012

Of course, what David is referring to is the "congressional district method" of awarding electoral college votes. Forty-eight of the fifty states award their electoral votes based on the winner of their state at-large. Maine and Nebraska award delegates according to the winner of each individual congressional district, awarding two bonus electoral votes to the statewide popular vote winner.

Wasserman's tweet struck me as intriguing given that Romney lost the national popular vote by a fair margin of 3.7 points. How could this be?

The most obvious answer is gerrymandering, the process by which political parties manipulate geographic congressional boundaries for political gain. But the bizarre result still had me wondering how the gerrymandering process would have effected presidential results throughout history, in the event all 50 states adopted the Maine/Nebraska EV rule.

Below is a chart comparing actual electoral college votes to what the vote would have been had all states adopted the Nebraska/Maine method of apportioning electoral votes: 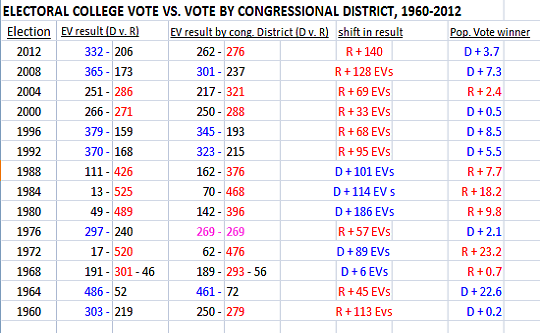 As the fourth column of the chart indicates, the 1990 Census allowed Republicans to snatch away from Democrats their long held advantage in congressional district redrawing. The Republican gerrymander advantage becomes even more apparent following the 2000 and 2010 redrawings.

The chart also indicates that only twice would the result by congressional district have effected the overall outcome of the race: in 2012 and 1960. Democrats won both of those races, while Republicans would have won under the Maine/Nebraska plan. In 1976, both Carter and President Ford would have won exactly 269 congressional votes apiece.
Posted by brandon at 2:34 PM