I know that my posts have been sparse as of late (life got busy this month), but I intend for that to change next week. My hope is to have 3 new posts up regarding potential weaknesses for a Hillary 2016 primary run (based on '08 exit poll data), public perceptions of Howard Dean in light of his openly considering another presidential run, and a comparison of Presidential job approval and favorability throughout the last three presidencies.

So check back soon!
Posted by brandon at 3:53 PM No comments:


Quinnipiac University lit up the twitter-sphere this morning after releasing their first survey of the 2014 Colorado Governor's race showing anti-immigration firebrand and 2010 loser Tom Tancredo (R) trailing the once popular Gov. John Hickenlooper by ONE point, 42-41%.

Hickenlooper burst onto the scene in 2010, a year not remembered for impressive Democratic landslides by any stretch. Yet that was what the 1-term Colorado Governor accomplished when he defeated Tom Tancredo (Constitution Party) and Dan Maes (R) in a 3 way race, 51-36-11%.

In his first two years in office, Hickenlooper enjoyed widespread and bipartisan support from Colorado residents, averaging a rare 59/25% job approval/disapproval rating. In fact, during the presidential year alone, where partisan loyalties typically result in increased polarization, and thus, lower ratings for elected partisan officials, Hickenlooper managed to never dip below 54% job approval in a single poll, while never rising above 36% job disapproval. He actually averaged 60/26% for all of 2012:


But a series of deeply unpopular legislative moves have eroded the good will and bipartisan support he enjoyed his first two years (such as granting a temporary death penalty reprieve for a convicted murderer, a move opposed by 67% of Colorado voters, according to Quinnipiac).

And though polling data has been limited so far this year with regards to Gov. Hickenlooper's job approval, the two pollsters to survey this question have shown serious deterioration in his numbers.

Public Policy Polling had previously measured Hickenlooper's job approval just before the presidential election, when he clocked in with an impressive 55/26%, or +29. But just 6 months later, their April survey found him at 53/44%, a net 20 point drop.

Quinnipiac's shift was even more drastic, if you can believe it. They too found Hickenlooper's job performance widely admired in their last survey taken pre-election (59/21%, +38). Yet 9 months later, in the survey released today, they find Hickenlooper's ratings have collapsed by a net 34 points!

Movements in public perception of this size in such a short span are pretty rare. But nothing drives home the reality of Hickenlooper's decline more than the fact that Tom Tancredo is nipping at his heels for the 2014 Governor's race, if Quinnipiac is to be believed: 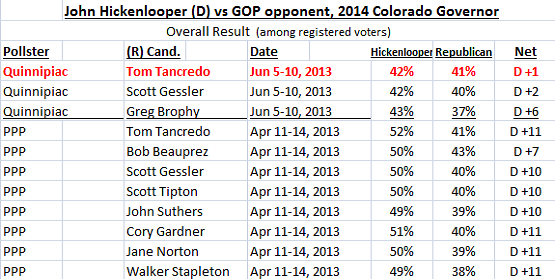 A Rising Tide Lifts All Boats: Will Obama's Improved Standing in Massachusetts Carry Ed Markey Over the Finish Line?


With the Massachusetts special senate race just over two weeks away, pollsters are providing us with a mini-avalanche of new data, a great deal of which appears conflicting at times. But one thing the pollsters seem to agree on this go 'round is the level of Massachusetts approval for the job President Barack Obama is doing in Washington D.C.

Despite having endured what many would refer to as the worst month of his Presidency (it started with the Benghazi whistleblower in early May, then moved to the IRS scandal, then the James Rosen Fox News Reporter dust-up, then the A.P. phone records scandal, followed by the NSA whistleblower, culminating in today's State Department scandal), Massachusetts still largely approves of the job he's doing. Obama manages an average 57% job approval rating in what is arguably America's bluest state. Just 39% of Bay-Staters disapprove of the job he is doing. See the chart below:


With only one exception (the UMass/YouGov poll), Obama's net job approval rating is relatively high, certainly compared to his national average. It ranges from +31 in the first Suffolk survey, to a low of +1 in the YouGov poll. Compare that, however, to his job approval/disapproval rating in the 3 weeks before the 2010 special election between Scott Brown and Martha Coakley:


2010 "likely voters" were much more down on the job the President was doing then than they are now. His average rating is a net 10 points lower than it was in Massachusetts three years ago. His spread ranged from +1 to +16, though Rasmussen was the only pollster to show Obama's net approval rating as high as double digits. The rest found it in the low single digits.

Hillary Clinton received some of her first negative press of the 2016 Presidential cycle last week when Quinnipiac University released a poll showing her net favorability rating had dropped 15 points since their last poll in February.

It has a lot to do with the partially false, media-created notion that Hillary Clinton is nearly invincible as it pertains to the 2016 Presidential election, in part because she is so universally adored.

But a quick glance at her favorability ratings over the last half-year illustrates that the perception of Hillary as this overwhelmingly popular national figure certainly has its exceptions:

First off: the chart makes it easier to see why Quinnipiac's recent 52/40% rating, while not a bad finding in a vacuum, represents a troubling trend for Hillaryland.

But back to my original point: besides the negative trend lines, the chart also illustrates how Hillary Clinton's favorability decline is not a brand new phenomenon, recent media-interest aside.

It was January 2013 when PPP released a survey showing Clinton with a 54/39% favorability rating, the first non-Rasmussen survey since September 2008 to show Hillary with a net favorable/unfavorable rating lower than +20. But nary a word was mentioned about the finding at the time. The silence continued as PPP and YouGov released surveys showing Hillary's favorability rating at less-than-God-like status.

The steady decline in Hillary's ratings throughout 2013, especially as compared to her numbers while Secretary of State, looks even more pronounced in the below chart of her monthly average favorable/unfavorable rating:

With a current monthly average net favorability rating of +14, Hillary's numbers are at their lowest point since before becoming Secretary of State.