Trump vs. Rubio vs. Cruz In The Electoral College - Who Beats Clinton?

As the 2016 presidential race progresses, I've given in and decided to try my hand at a bit of electoral projection. True, I'm playing in a crowded field with bigger and better players, but this is mostly for me. Plus, everyone needs a hobby.

For starters, this projection will be purely electoral college based, relying entirely on polling and nothing else, as opposed to say FiveThirtyEight, which employs a nifty "polling plus" forecast. Why not just rely on Pollster, or Real Clear Politics, you might ask? While both sites are exemplary, RCP excludes some surveys, and Pollster has yet to start projections for individual states in the general election - not to mention both sites aren't quite as up-to-date with the latest polling information as I would like them to be.


Now, on to the projections...starting with the strongest Republican candidate, based on current polling: 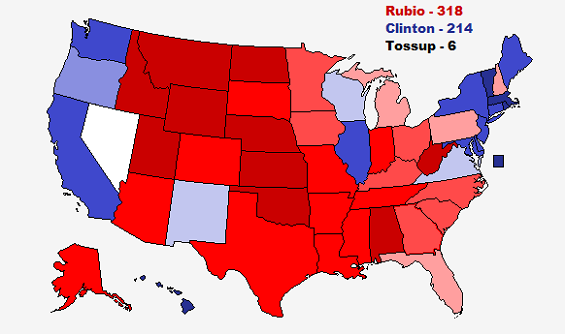 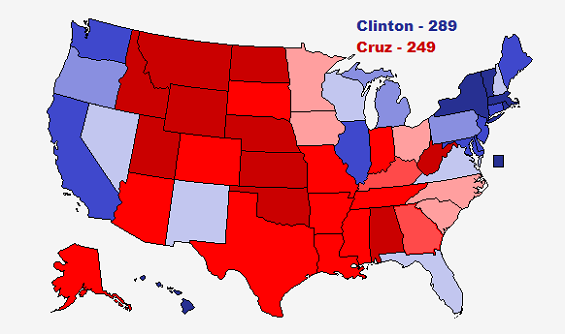 Unlike Rubio, the latest state polling puts Texas Senator Ted Cruz in danger of a 2004-style electoral rut, only this time, with the Republican losing. While Cruz is able to flip a handful of Obama 2012 states (Colorado, Minnesota, Iowa, and Ohio), it isn't enough to hit the magic mark of 270. So though it appears Ted Cruz would improve on Romney's margin from four years ago if the election were held today, he would still fall short of capturing the White House. State projections based off historical analysis due to a lack of post June 2015 polling are: AL, AR, CT, DE, HA, ID, IN, KS, LA, ME, MD, MA, MI, MS, NE, NV, NJ, NM, ND, OK, OR, RI, SD, TN, TX, UT, VT, and WA. 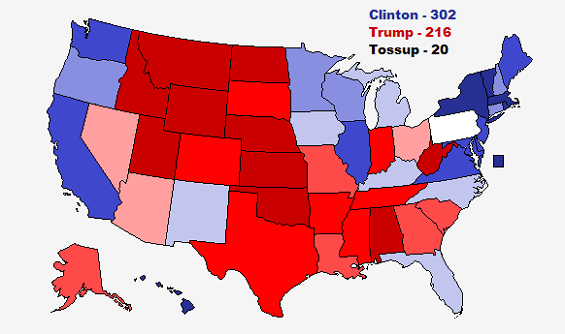 Of course, this brings us to the proverbial elephant in the room - Donald Trump. Contrary to poll after poll indicating Republicans believe the billionaire businessman to be the most electable candidate of the field, he's actually the least electable from an electoral college perspective, at least for now. Not only does Trump flip fewer states to the GOP column than Rubio or Cruz (only winning over Nevada, Colorado, and Ohio), he loses a couple of Romney states to Clinton (Kentucky and North Carolina). State projections based off historical analysis due to a lack of post June 2015 polling are: AL, AR, DE, HA, ID, IN, KS, ME, MD, MS, NE, NJ, NM, ND, OK, OR, RI, SD, TN, TX, VT, and WA.

Electability does not operate in a vacuum. It's fluid. So naturally, campaign developments such as a primary victory or a major debate stumble could alter these maps remarkably quick. But as it stands today, the Republican Party's third place candidate, in terms of primary popular vote and delegate count, is 1st place in terms of ability to win in November.
Posted by brandon at 7:58 PM