In every presidential election since exit polling began over forty years ago, Democrats have performed stronger among women than men, while Republicans performed stronger among men than women. Of the eleven elections since 1972, Democrats have lost the female vote in four (1972, 1980, 1984, & 1988), all of which resulted in electoral landslide defeats for their party. The same is true for the three of eleven elections (1976, 1992, and 2008) where Republicans lost the male vote.

While the difference in voting patterns between the sexes is clear, the extent of that difference has varied widely throughout the years. In the most recent presidential election, the Democratic incumbent carried women by eleven points, while the Republican challenger carried men by seven, creating a gender-gap of eighteen points. But in 1976, when Democratic challenger Jimmy Carter defeated President Ford, the gap was less than ONE point. In 1972, when Nixon won reelection in a landslide, the gender gap was only three points.

The largest gender gap recorded by exit polling came in the 2000 election, where Gore carried women by ten points, while Bush carried men by eleven.

Yet in an election year where the most likely Republican nominee happens to have a knack for disparaging women, and where the probable Democratic nominee elicits an almost instinctual disdain from her male detractors, you have the recipe for a gender-gap explosion that could make the 2012 election, or even the 2000 contest, seem tame.

In fact, if current polling is any indication, that's exactly where we are headed.

Hillary Clinton averages an impressive 53-35% lead over Donald Trump among women. You have to travel back to 1972 to find a presidential candidate with a larger advantage than she among the female vote - and that, ironically enough, belonged to Republican Richard Nixon. Clinton's lead among women ranges from as high as twenty-eight points in one recent poll, to as little as eight points in another.

And while Trump's 49-40% advantage among men is less impressive than Hillary's performance among women, it's still more impressive than Mitt Romney's 52-45% win in 2012. Trump ranges from as high as an eighteen point lead among men, to as little as three points.

The largest gender-gap found by a single pollster this year is forty-one points! It stems from a February CNN survey finding Clinton leading 62-34% among women, with Trump winning men 54-41%.

To better illustrate the potential for a gender-gap "explosion" this November, consider the graph below: 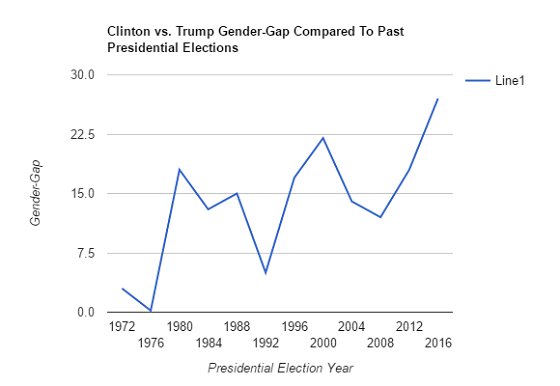 And if the general election horse race numbers fail to convince you of the potential for a widening gulf between the presidential preferences of men and women, consider the favorability ratings of Donald Trump and Hillary Clinton. Not surprisingly, you'll see there's a significant gender-gap here as well.

The gender-gap is even more stark if you take out the one internet pollster, YouGov, which compared to the non-internet surveys used in the average, seem a bit outlier-ish.

In the era of Trump,  you can expect to hear lots about the many ways we're divided as Americans. Though if current polling holds, the battle of the sexes could give racial, class, and religious divisions a run for their money.
Posted by brandon at 12:15 PM