Over the last few weeks, Americans have heard a flurry of stories regarding abortion (or not). From the mass infanticide that occurred at the hands of Dr. Kermit Gosnell at a Pennsylvania abortion clinic, to tough new restrictions being enacted in four states, the always-controversial topic has returned to the center of public debate. And according to at least one source, a narrow majority now think abortion should be illegal with or without exceptions, even as 53% say they support gay marriage.

But contrary to NBC's recent finding, a close look at the entirety of abortion polling over the last two years indicates Americans are generally more supportive of abortion rights than not, with less than a quarter supporting a blanket ban. However, as often the case, abortion polling data is highly predicated on question wording/phrasing.

This article takes a look at the often complex nature of abortion polling from January 2011 to present, using surveys compiled from pollingreport.com, argjournal.blogspot.com, and other assorted internet searches.
Now, back to question wording.

Opinions on abortion are all over the map, depending on how the pollster chooses to phrase the question and frame the debate. For example, opposition to the procedure tends to run a bit higher than average when pollsters specifically offer the rape/incest/life of mother exception as an answer option. In fact, the above referenced NBC/WSJ poll showing 52% opposing abortion with or without restrictions specifically asked: "Which comes closest to your view on abortion--abortion should always be legal, should be legal most of the time, should be made illegal except in cases of rape, incest and to save the mother's life, or abortion should be illegal without any exception?"

Over the last two years, 5 polls have been taken in which the abortion question contained some variation of the rape/incest/life of mother option, and by a 50-48% margin, respondents felt abortion should be illegal with or without exception. 48% of respondents said abortion should be legal in all or most circumstances:

Americans also tend to lean more liberal on abortion when the pollster asks them to identify themselves as either pro-choice or pro-life. Seventeen polls have asked that specific question since the beginning of 2011, with a bare majority identifying as pro-choice (50%), and 43% identifying as pro-life: 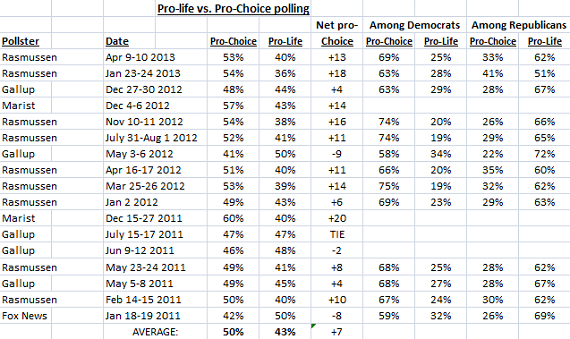 Fortunately, most of the abortion survey question phrasing lends itself to being broken down into two categories: pro-choice or pro-life. For example, survey respondents who say they support abortion only in the case of rape, incest, or to save the life of the mother, or say that they oppose abortion without excpetion, would probably reasonably refer to themselves as pro-life. Meanwhile, those survey respondents that indicate they support abortion under ALL or most circumstances can reasonably be expected to identify as pro-choice. Likewise, survey respondents that say they favor abortion under few or limited circumstances would be classified as pro-life, while those that support abortion in most cases or with limited restrictions would be classified as pro-choice. 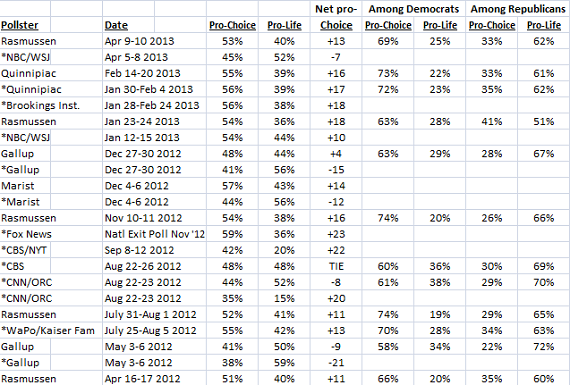 As you can see, while it sounds cliche to say abortion is a divisive issue, polling suggests that it truly is.

When the abortion survey question specifically includes the rape/incest/life of mother exception, OR when the question is phrased as Gallup and CNN did above, Americans lean towards being pro-life (by as much as a 61-37% margin, per a May 2011 Gallup poll). When respondents are asked if they're pro-choice or pro-life, OR if the question is phrased the way Quinnipiac, Pew, etc did above, Americans tilt strongly pro-choice (by as high as a 59-36% margin, as found by 2012 national exit polling).

In other words, Americans are roughly split on the issue. Remember that the next time someone argues the country is moving right on abortion as it moves left on gay marriage. In terms of legislation, that may be the case. Public opinion, however, doesn't support that theory.