Operation Chaos Part Two? What The Lack Of A 2016 Democratic Primary Could Mean For The Republican Contest


A recent piece featured in U.S. News & World Report by The Run 2016 founder Dave Catanese briefly examined the effects of a non-existent Democratic Presidential primary on a competitive GOP nominating contest.  His focus was New Hampshire, where self-identified independents make up a larger than average share of both the Republican and Democratic electorates. Catanese's suggestion is that with Clinton virtually clearing the Democratic field, the Granite State's independent base will flock to the Republican primary.

Exit polling indicates Catanese is correct. In 2008, when both political parties were deep in the throes of competitive contests, self-identified independents and Democrats made up 39% of New Hampshire Republican Primary voters. Four years later, with President Obama running unopposed on the Democratic side, independents and Democrats, as a percentage of voters, jumped twelve points to 51%.

To be fair, this anomaly isn't limited solely to the Granite State. In Iowa, independents and Democrats jumped from just 14% of GOP caucus-goers in 2008 (when both Republican and Democratic primaries were competitive), to 25% in 2012 (when Obama ran unopposed).

The number of non-Republicans voting in the GOP nominating contest increased from 2008 in sixteen of the twenty states that conducted exit polling in 2012, or 80% of the time.

Why the sharp increase? Absent a uniform national 'open primary' movement, the lack of a competitive primary on the Democratic side seems like the obvious culprit.

Based on data compiled from the twenty-seven states to feature an exit poll in the 2008 GOP primary, and final vote counts provided by Dave Leip's US Election Atlas, self-identified Republicans made up 76% of the Republican primary electorate, independents made up 20%, and Democrats made up 3%. All total, those who identified as something other than a Republican made up 24% of the national electorate. 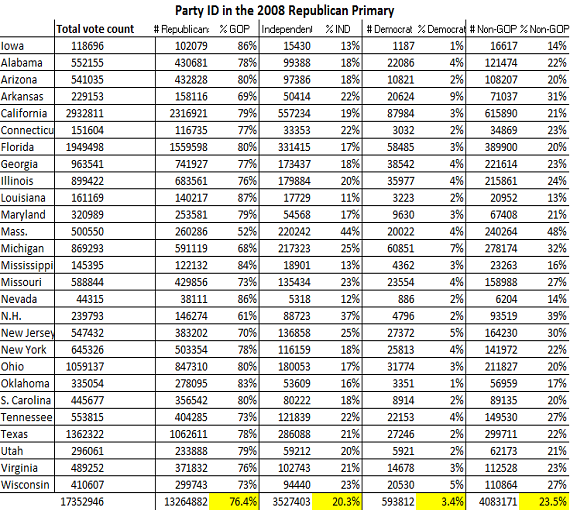 “If there is no race on the Democratic side, then the independents will look increasingly at the Republican side. And you can’t predict where they’re going to go. It feels more like a real election."


Now that we've established that independents will indeed look to the GOP contest absent the emergence of a serious challenger for Hillary Clinton, the emphasis falls on the second sentence quoted above. The problem is, neither current polling, nor Republican Primary results from 2008 to 2012 provide much insight into who stands to benefit from an influx of independents and Democrats in the 2016 GOP primary.

Take 2008, for example. Few would be surprised to learn that John 'The Maverick' McCain was the biggest beneficiary of independent and Democratic votes in the Republican primaries that year. McCain carried independents against Mitt Romney and Mike Huckabee by a 42 - 21 - 19% margin, respectively. If you throw Democrats and everyone but Republicans in the mix, McCain's margin against Romney and Huckabee grows ever-so-slightly to 43 - 21 - 19%. That's more impressive than how McCain performed with self-identified Republicans, which he carried against Romney and Huckabee just 42 - 27- 23%. In fact, McCain failed to carry self-identified Republicans in any primary state until Super Tuesday on February 5, 2008. Even then, it required the momentum from previous wins in NH, SC, and Florida to get there.

So there you have it. A John McCain-like moderate, a la Jeb Bush or Chris Christie, stands to gain the most in the event Hillary Clinton is crowned the Democratic nominee, thanks to the impending flood of 'non-Republican' voters, right? Eh, not quite.  Prior primary results, as well as the somewhat limited data we have from current 2016 primary polling, does not support such a theory.

In 2012, you might be surprised to learn that it was arch social conservative Rick Santorum who benefited the most from primary voters who did not identify themselves as Republicans. Among this group of voters, which made up 30% of the GOP electorate in the twenty exit-polled contests, Mitt Romney defeated Rick Santorum just 34 - 26%. Ron Paul finished 3rd with non-Republicans, with 19% of their vote, while Gingrich carried 15%. See the table below:


Among self-identified Republicans, however, Mitt Romney's advantage over Santorum, Gingrich, and Paul grew. He won 42% of Republicans, while Santorum picked up 28%, Gingrich 23%, and Paul collapsed to 6%.

Like Rath mentioned, we have no way of knowing, at least not based on primary surveys to date. Most pollsters either do not ask, or do not provide the crosstabs to the partisan identification question in presidential primary polling. And the few that do have revealed mixed results, to say the least. See the table below of 2016 GOP poll results by party identification to date: 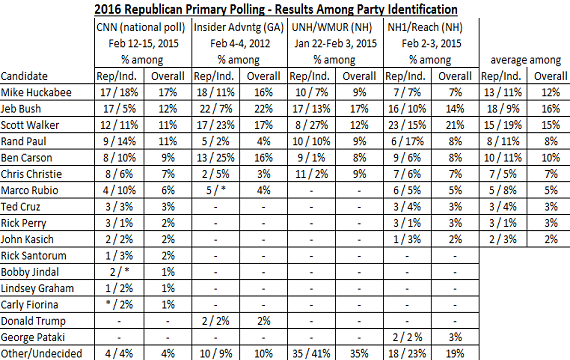 Thanks to the sheer volume of potential candidates, they're bunched together among both Republicans and non-Republicans.

Just for fun, let's just assume that the current conventional wisdom - that Hillary will walk to the Democratic nomination unchallenged - is correct, and the Republicans have a very crowded and competitive nominating contest. In that case, the partisan make-up of the 2016 GOP primaries would likely resemble that of 2012,  another year in which the Democratic race was a sleeper.

And with 2012 as our guide, we could expect that the surge of non-Republicans to the ballot box might benefit a polarizing, firebrand conservative. This group certainly benefited Rick Santorum in 2012, and not because they felt any genuine affinity for the socially conservative rabble-rouser. It was because he appeared to be the most unelectable Republican that could potentially topple Mitt Romney (remember 'Operation Hilarity,' inspired by Rush Limbaugh's Operation Chaos in 2008?). In fact, Santorum actively sought Democratic votes at times. Their support helped keep his performance in crucial states like Michigan, Ohio, Illinois, and Wisconsin nearly on par with Romney's. 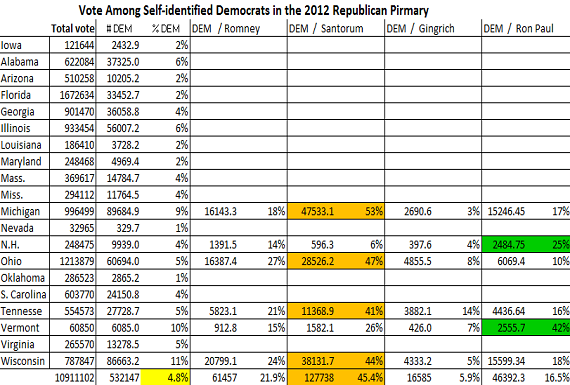 Who is to say independents and Democrats won't do the same again? Suppose self-identified Republicans stick with the "establishment" candidate next year, as they did with Romney four years ago - a Jeb Bush, or even Scott Walker-type, while non-Republicans throw their support behind more quixotic bids like those by Ted Cruz, Rand Paul, or Ben Carson. One lesson of 2012 is that folks who cross party lines to vote in a primary are usually up to no good, and are more likely sabotaging, rather than genuinely supporting, the other party. In a year where there's a fair chance the Republican contest will be the only one worth watching, and independents and Democrats flood the process as a result, it's the Cruz/Carson/Paul type that stands to benefit most.

One thing is more certain: if the Democratic primary remains as uneventful as it has thus far (and there is potential to think that could change), the share of independents and Democrats in the GOP primary electorate will more closely resemble that of 2012 than 2008. If a strong challenger emerges for Mrs. Clinton, self-identified Republicans will probably comprise a larger share of the GOP electorate.

Much, much less certain is which potential 2016 GOP candidate is likely to benefit in the event of either scenario in the paragraph above. The somewhat instinctive assumption that independents would be more likely to support a less conservative candidate like Christie or Bush (as they did McCain in 2008), was blown apart in 2012 by Rick Santorum.

Either way, I'm sure Markos Moulitsas, who happens to support Mrs. Clinton, wouldn't mind another round of Operation       insert favorite dramatic noun       ?
Posted by brandon at 12:32 AM