To the chagrin of the sixty-to-seventy-odd percent of Republicans who do not support Donald Trump as their nominee for president, the billionaire firebrand is looking mighty dominant in post-New Hampshire primary polling. But how is he standing up compared to past polling front-runners at this point in the campaign? For Trump critics, the news is pretty bleak, yet not without at least a faint glint of hope.

In my experience, it's always best to start with the bad news, so here goes:  in nearly every presidential primary since 1976, the national polling leader between the New Hampshire and South Carolina primaries has gone on to become their party's nominee. Specifically, of the fifteen post-New Hampshire national primary polling leaders examined over the last forty years, twelve eventually earned their party's nomination (or 80% of the time).

Having said that, Donald Trump is currently the Republican's national polling leader, and by a wide margin. With one day remaining until South Carolinians head to the polls, Trump's averaging 36% support from Republicans across seven primary surveys conducted after the New Hampshire primary, reaching as high as 41% and as low as 26%. He maintains an average seventeen point advantage over his next closest competitor, Ted Cruz.

Faced with the numbers, and what we know of history, what else is there to conclude other than the fact that Trump appears headed for the Republican nomination?


Well, as foreboding as all this sounds, it isn't  necessarily as cut and dry as Trump supporters would hope. First of all, consider the table below, which documents past national polling leaders following the New Hampshire primary, their polling average in surveys conducted between the New Hampshire and South Carolina contests, their highest and lowest poll result during that time period, and whether or not they won the Iowa, NH, and SC contests: 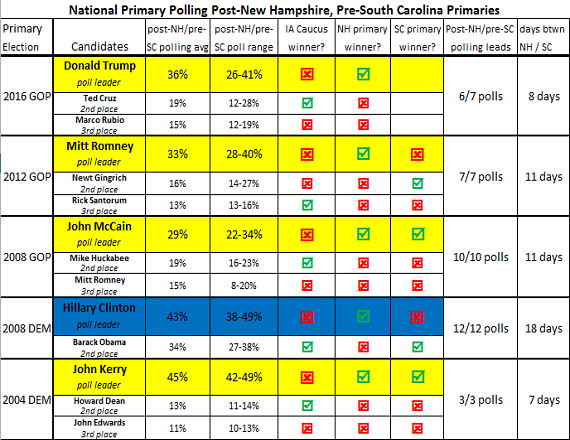 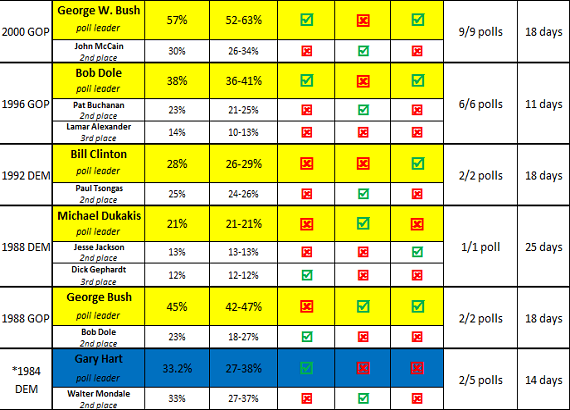 Plainly, Donald Trump is sitting in good company with past post-NH polling leaders who went on to become their party's nominee, e.g., Mitt Romney, John McCain, George W. Bush, etc. But note that there are at least three instances since 1976 in which the post-NH national poll leader did not go on to become his or her party's nominee - Gary Hart in 1984, Hillary Clinton in 2008, and Hubert Humphrey in 1976.

Former Colorado Senator Gary Hart and eventual 1984 Democratic nominee Walter Mondale both had primary victories in their column following the New Hampshire contest on February 28. So it was no surprise to see the two of them exchange national polling leads during the fourteen days before the next series of contests. In the end, the "outsider" Gary Hart just barely edged establishment figure Walter Mondale in an average of the five polls conducted, 33.2% to 33.0%. Of course, the two men would go on to engage in a back-and-forth delegate battle that would last four more months, with the man who was not the clear, decisive national polling leader following New Hampshire going on to capture his party's nomination.

A more recent example of a post-New Hampshire national polling leader who did not capture their party's nomination is Hillary Clinton in 2008. Not only was she the national polling front-runner following her victory in New Hampshire, but like Trump, she dominated the primary race for months before the first contests took place. Clinton's primary loss is historically known, having fallen irreversibly behind thanks to a prolonged series of caucus losses throughout the month of February. But her 2008 path is one that many Republicans hope to see Trump take soon.

There is one other occurrence in which the post-New Hampshire primary national polling leader did not go on to become his party's nominee - the 1976 Democratic primary. A little known southern Governor by the name of Jimmy Carter was gathering steam by finishing second in Iowa, and first in New Hampshire. Yet for all his newfound name recognition following New Hampshire, he still trailed former Vice President and Presidential nominee Hubert Humphrey nationally - this, despite the fact that Humphrey had yet to enter the presidential race, and ultimately never would.

But let's face it folks - the 2008, 1984 and 1976 scenarios don't look all that similar to what we're seeing today. Unlike in '76, there is no unannounced Republican lurking over the heads of the current crop of candidates. Unlike in 1984, Trump's national polling situation is much more dominant than Gary Hart's. And unlike in 2008, Trump's closest competitors aren't quite nipping at his heels the way Obama was to Hillary at this point.

So for some semblance of hope, it might be better for Trump opponents to look elsewhere. For example, in 2012, though Romney took a commanding national polling lead following his New Hampshire victory, he would go on to lose that advantage to both Newt Gingrich and Rick Santorum for extended periods of time in a contest that did not wrap up until three months later. Though Romney ultimately succeeded in securing the nomination, at least he stands as an example that a solid national polling advantage following the New Hampshire primary is not guaranteed to stick around.

Also consider the 1980 Democratic and 1976 Republican primaries, where candidates who were *not* leading nationally following the New Hampshire primary, nonetheless, managed to rack up impressive late primary contest victories, while closing their national polling gap. While Reagan in '76 and Kennedy in '80 were also ultimately unsuccessful at securing their party's nomination, they provide a roadmap for how Ted Cruz or Marco Rubio might overtake Donald Trump.

Without sugarcoating, the bottom line is that the picture isn't pretty for those passionate about keeping Donald Trump away from the GOP nomination. History stands in our way. But the few exceptions I've noted, as well as the admittedly small sample size of data we're dealing with, should at the least provide justification for non-Trump candidates to carry on, and perhaps even provide a little encouragement.
Posted by brandon at 5:06 AM