The Silent Center: How Republican Moderates Have Come To Dominate Recent Presidential Primaries


Jeb Bush raised a few eyebrows last December when he stated that the eventual Republican nominee would have "to lose the primary to win the general without violating your principles." The seemingly paradoxical statement is an acknowledgement by Bush of the prevailing conventional wisdom in Republican presidential primaries - that Republican candidates damage their general election prospects by running right of mainstream America during the nominating contest. But more important, at least for the purpose of this article, was the implication that Republican candidates must beef up their conservative bona fides to win.

This second notion is popular among political pundits, making its way into piece after piece examining the historically large crop of potential 2016 GOP candidates for president. And it's nothing new. Mitt Romney perpetuated the notion with his "severely conservative" remark at the 2012 CPAC conference. John McCain's apparent insufficient conservatism was noted many times by pundits during the 2008 primary campaign.

The inclination to jump on the "too moderate to win the primary" bandwagon feels almost instinctual, especially for a party with as vocal of a strongly conservative faction as the Republicans. Yet an analysis of exit poll results from the 2012 and 2008 Republican primaries demands a different conclusion. No - the overall Republican primary electorate is not averse to an admittedly moderate candidate. Far from it, in fact.

Why? Because exit polling has indicated that self-identified moderates/liberals and 'somewhat conservative' voters greatly outnumber the far-right of the primary electorate.

By combining the results of the twenty states to feature an exit poll in the 2012 Republican primary, we find that self-described moderates and/or liberals comprised 33.3% of the national electorate, 33.1% identified as 'somewhat conservative,' and 33.5% identified as 'very conservative.' In other words, the GOP's self-described ideology fits very nicely into thirds.

In 2008, moderates and liberals made up an even higher percentage of the Republican base - 36.5%. Those identifying as 'somewhat conservative' made up 35.2% of the electorate. Self-identified 'very conservative' primary voters made up less than 30% of the 2008 electorate (28.4%)


As the first chart above indicates, self-described moderates and liberals made up a plurality of the primary electorate in eight states in 2012, or 40% of the time. And some of those eight were vote-rich locales, like Illinois, Michigan, Ohio and Wisconsin, or early voting states crucial to a candidate's momentum, like New Hampshire. For comparison, 40% of exit-polled states in the 2012 primary featured an electorate where a plurality identified as 'very conservative,' while 20% of states had a plurality identifying as 'somewhat conservative.'


But among very conservative voters - the group that popular mainstream opinion would have you believe defines the Republican Party - the eventual 2012 nominee won less than 30% of the vote nationwide. Romney carried the 'very conservative' vote in only six of the twenty exit-polled contests. Rick Santorum actually won this group of voters the most often, carrying them in eleven of twenty contests, with 36% of the vote. Gingrich was strong with this group as well, winning 26%.

Like Romney in 2012, the eventual 2008 nominee did quite poorly among the 'very conservative,' winning their support in just two of twenty-seven exit-polled contests, and just 24% of their total vote. The 2008 'very conservative' vote was split between Romney and Huckabee, 33-33%.

In light of the evidence above, is it still accurate to insist a moderate candidate move right in a Republican primary to win? Is the support of the most conservative members of the party a prerequisite to the nomination? Apparently not. As the charts above illustrate, if Romney had only 'very conservative' Republican primary voters to rely on in 2012, he would have won just 30% of the vote (rather than the 40% he won among GOP primary voters of all ideological stripes in the twenty exit-polled states). Instead of winning twelve of the twenty exit-polled states overall, he would have won just six. Likewise, in 2008, John McCain lost the 'very conservative' vote in 25 of 27 exit-polled states, and managed a measley 24% of their total vote (vs. 42% among primary voters of all ideological stripes in the twenty-seven primary contests to be exit-polled that year). 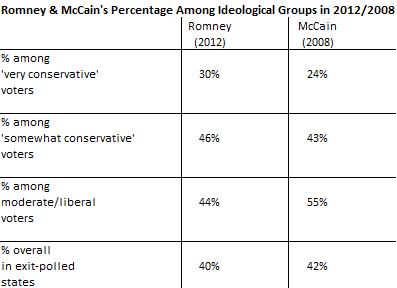 In other words, if conventional wisdom was accurate, and Republican primaries truly were dominated by right-wing activists and grassroots ideologues, Rick Santorum would have been their nominee in 2012, with 2008 being a nail biter between Mike Huckabee and Mitt Romney.

But just a note of caution in conclusion. While ideological identification in the last two Republican presidential contests verifies that a moderate can compete and perform well in a conservative party's primary, there are signs on the horizon that a change is coming. As noted above, the number of self-identified 'very conservative' voters rose quite sharply from 2008 to 2012, while the number of moderate/liberals fell ('somewhat conservative' primary voters remained stable). At the same time, the socially conservative leaning born-again, evangelical Christian vote rose from 44% of the GOP primary electorate in 2008, to 52% in 2012. Obviously, if trends like these continue in 2016, we could expect stronger performances from more conservative candidates like Ted Cruz, Scott Walker, Marco Rubio, etc, and weaker showings from the likes of Jeb Bush, Chris Christie, John Kasich, and other like-minded candidates.


A side note on separating the moderate/liberal vote: In 2008, John McCain was equally dominant among both self-described moderate voters, and the much less numerous liberal voters. But that trend did not repeat itself in 2012. As the nominating contest turned into a toss-up between Mitt Romney and Rick Santorum, a small, yet influential portion of the restless, uncontested Democratic primary electorate became involved in the GOP contest. While they split their preference evenly between Santorum and Romney from a national perspective, they became critical to keeping Santorum in the game in some of the later contests, such as Michigan, Illinois, and Wisconsin. This phenomenon has been discussed before in a prior post. With the 2016 Democratic primary all but guaranteed to be a snooze-fest, might we see mischievous Democrats rallying to Ted Cruz, or some other Republican they view as weak in a general election, over someone they believe to be stronger in a general election, like Marco Rubio?